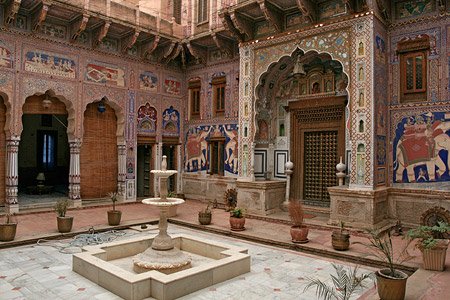 Shekhawati is primarily known for its beautifully painted Havelis, in its nearly 20 odd towns and various villages. It is situated in northeastern Rajasthan; across the Jhunjhunu, Churu and Sikar district. Initially, this semi-arid region offered nothing more than a monochromatic palette. It is said that the art of painting could fully thrive only when history took this colourless page up and made it bloom with colour for almost two centuries- from 1750 to 1930. Today, this region is popularly known as the open-air art gallery of Rajasthan.

The majority of the painted towns and villages are situated in the West and North of the Shekhawati region. It can easily be reached from Delhi, Jaipur and Bikaner.

Sikar was the largest contributor to the Jaipur treasury during the feudal times. The town of Sikar was founded in the late 17th century and has great examples of frescoes in the Raghunath, Gopinath and Madan Mohan temples. Other popular torist attractions are the Jubilee Hall, Bhiwani Haveli, Madho Niwas Kothi and Sodhani Haveli. 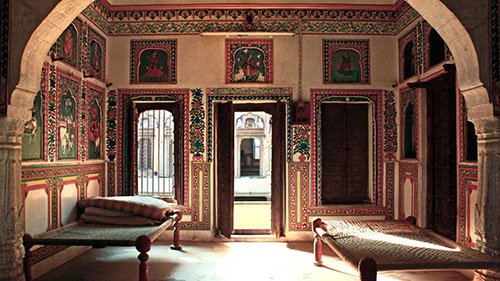 The district town of Jhunjhunu is the capital of New Shekhawati. It was another stronghold of the renowned Kayamkhani Nawabs until 1730 when Shardul Singh established the Hindu rule and his descendants then governed this region till India’s Independence. This town houses various attractive, aesthetically painted and easily accessible Havelis of Mehau Dass Modi, Marugh Das Tibriwal and Khaitans. Apart from these Havelis, the famous Khetri Mahal (Wind Palace) is well-known for its purity while the Bihariji temple deserves recognition and endless praise for its elegant frescoes.
Other worth visiting places in this oldest historical city include Badalgarh, Jain Temple, Kamruddin Shah Ki Dargah, Jorawargarh, Ajit Sagar, Mertani Baori and Birdi Chand Ka Kuan.

Churu is well-known for its Havelis. Some of the most attractive ones are Kothari Haveli (1915) and Kanhaya Lal Bugla Haveli (1870) with exquisite life-size paintings of Dhola Maru, Sasi -Punu. Another popular Haveli is the six- storeyed high Surana Haveli with more than eleven hundred doors and windows.

By Air – Jaipur is the nearest airport

By Rail – The towns of Sikar and Jhunjhunu are well connected by rails.

By Road – Shekhawati is connected by road with the major cities of India. Some important distances are