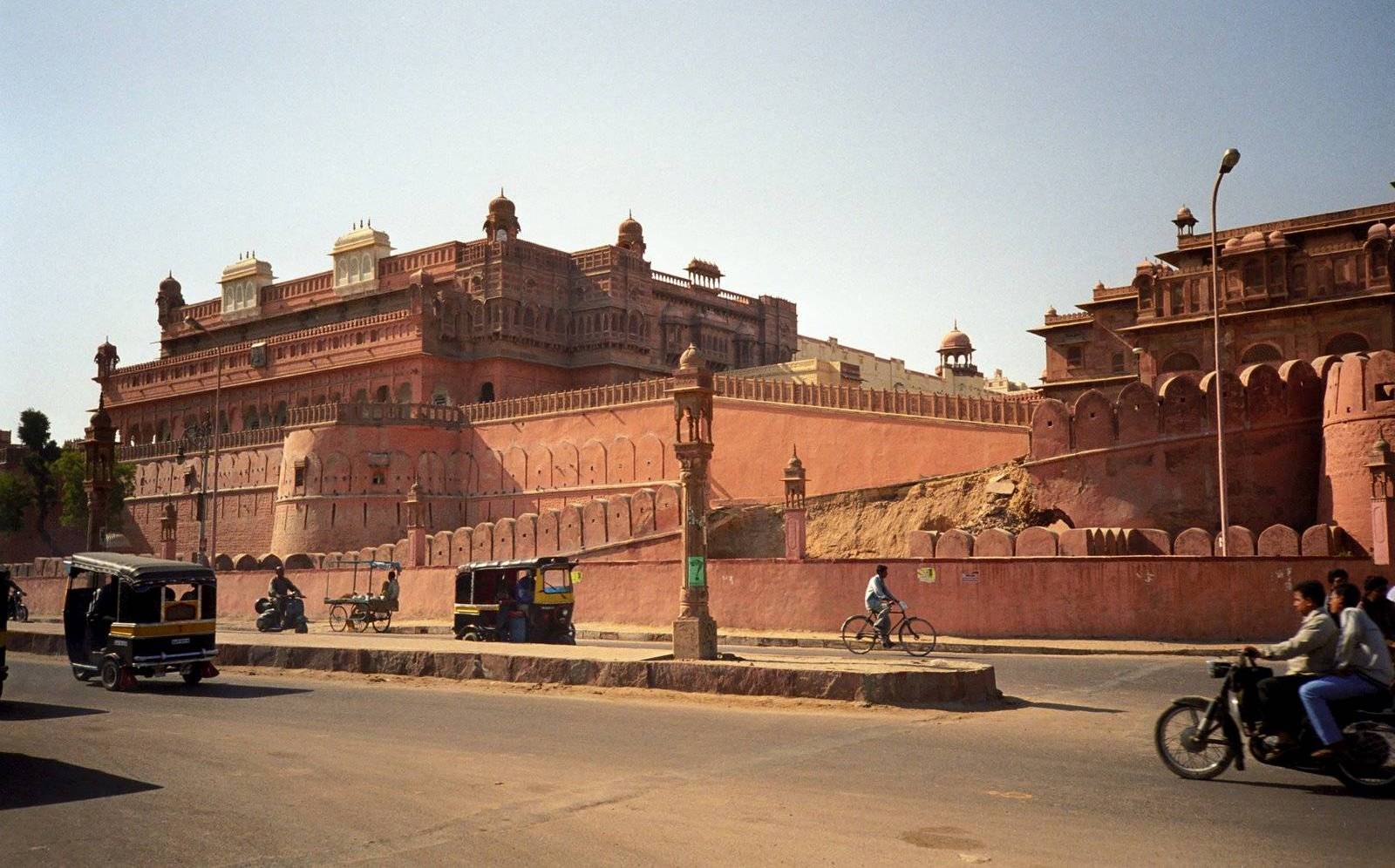 If you are thrilled by the inexorable forces of nature, Bikaner is the place to be. Spending time in Bikaner brings you as close to the desert life as you can get. Unlike anything you’ve seen on picture postcards; Bikaner possesses the beauty of mysterious, calm and splendid sand dunes. One thing that will surprise you is that Bikaner, although in the middle of a desert, is devoid of cactus. However, there are plenty of scrubs around such as gorse, thorn and milkweed that sprout precariously. The earth is bustling with brazen insects and striking birds.

Bikaner is the land of camels and the livelihood of people living in the city depends on this mighty animal. They pull heavy carts, work on the wells, transport grain etc. Wells are more important than one would believe, almost sacred, primarily because water lies approximately 122 metres below the surface at Bikaner. These wells are built on high plinths, and the slender minaret towers on each of the four corners proclaim their existence from afar, like a roar of welcome, a majestic sight to see. In the year 1459, Rao Jodha Rathore of Marwar, scion of the Rathore clan of Rajputs, founded the royal city of Jodhpur. Amongst his five sons, Bikaji was the most lively and enterprising and he went on to establish the magnificent city of Bikaner. Bikaner, the fortified city, is encircled by imposing battlements and stands on a slight mound. It is the fourth largest city of Rajasthan. Its roads ripple through vivid bazaars, and the prevailing hue of the buildings is in the strong reddish pink of local sandstone, mixed with the orange glow of the setting sun, Bikaner redefines Wordsworth’s thing of beauty. 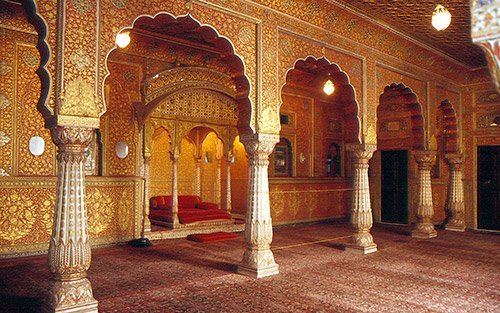 Raja Rai Singh (1571-1611), an outstanding General of Mughal Emperor, Akbar, built this imposing fort of Junagarh. The fort houses numerous palaces and temples made of red sandstone and marble with kiosks and balconies, embellishing the structure at various intervals. They have impressive carvings, paintings and mirror work.

Suraj pol or the Sun gate is the main entrance to the fort. There is a majestic chapel by the name of Har mandir where all the royal weddings and births were celebrated in earlier times. Among the palaces housed in Junagarh fort, the most beautiful is Phool Mahal or the flower palace which is elaborately decorated with carvings and mirror-work; and Chandra Mahal or the Moon Palace which has enormous and exquisite paintings on lime plaster walls. These palaces were constructed by Maharaja Gaj Singh (1746-87). These and other notable palaces like Karan Mahal, Anup Mahal, Ganga Mahal, Badal Mahal and Ganga Mahal are adorned with graceful screens, gigantic columns and arches. The facade of the monuments visible from above the high powerful walls, provide a celebrated view of pavilions projecting a row of balconies, kiosks, and mounts at intervals from a distance.

Maharaja Ganga Singh built this palace to commemorate his father, Maharaj Lal Singh. It is a spellbinding piece of intricate carving in magnificent red sandstone and is marked brilliantly by the intricate filigree work. There is also a magnificent collection of archaic trophies and photographs of wildlife, well preserved and exhibited in the banquet hall. Nature too has inevitably enhanced the beauty of this monument manifold. The sprawling lawns are often graced by dancing peacocks and blooming bougainvillea. Part of the palace has been renovated to serve as a grand hotel, and the remaining is open for visitors.

Situated en route to Jodhpur, this temple is dedicated to Karni Mata -an incarnation of Durga. It is Marked by fascinating marble carvings and humongous silver gates that were donated by Maharaja Ganga Singh Ji. One of the most unique traits of the temple is the presence of rodents within its premises. These rodents are believed to be God’s messengers and according to a sacred belief, if one of these touches the feet of the devotee, it is highly auspicious and brings good luck in the latter’s life. These little creatures are often fed by the devotees as a sign of their devotion towards the Almighty.

Camel constitutes the most vital species of the desert ecosystem. They utilize various adaptive mechanisms that are most suited to desert life. They can survive in extremely hot climate with high solar radiation and sustain on salty and thorny bushes  as well as coarse fodder. The Indian Council of Agriculture Research (ICAR), considering the importance of this species in the development of arid and semi-arid zones, has established National Research Center on Camel (NRCC) at Jorbeer, Bikaner (8 km).

Bikaner is the home to the Bikaneri camel breed that is a true representative of Indian single-humped camels (Camelus dromedarius). This government-managed farm is unique and largest in Asia. It houses hundreds of camels and in the late afternoon when camels come back from grazing, the scenario is unparalleled. You can also have some thick camel milk while you actively listen to a camel breeder’s tribe- Raika or Rebari, telling you about camels and camellore and how they are bred. The gambolling baby-camels make a very enchanting sight.

By Air- The nearest airport is Jodhpur 243 km.

By Rail- Bikaner is connected with Delhi, Jaipur, Jodhpur, Udaipur and almost all the major cities of India.

By Road- Bikaner is connected by road with the major cities of India. Some important distances are