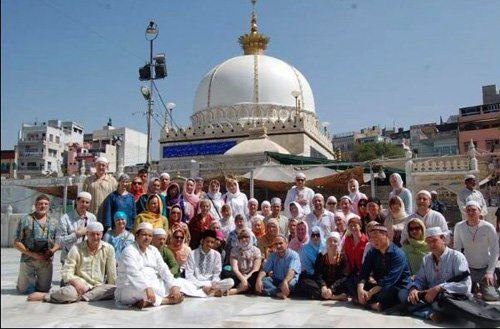 Ajmer is connected with Delhi, Agra and Jaipur by principle interstate highways and holds the way to Gujarat and Malwa. The vital position of this city has prompted its turbulent history. It was the capital of the empire ruled by Chauhan dynasty, yet after Prithviraj Chauhan was vanquished by Sultan Mohammed Ghori (1193), it confronted a checkered and brutal history.

Ajmer is a genuine amalgam of both Hindu and Islamic societies and a large number of pilgrims from both religions visit the place every year. Pushkar lake is believed to cleanse the sins and cure skin diseases of Hindus who take a dip in its holy waters. The heavenly Temple of Brahma is located on its banks. Khwaja Moihuddin Chishti of Persia, revered Muslim saint, is burried here, and his Dargah is similarly holy for Islamic supporters. Emperor Akbar in his times made an annual visit to the shrine of the Saint, sometimes on foot, just as any ordinary pilgrim would. 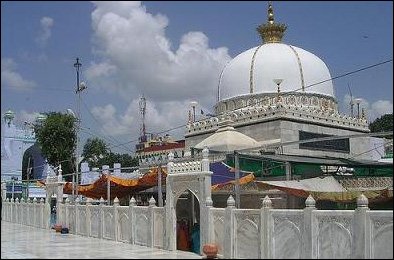 Situated at the foot of Taragarh hill in Ajmer is the Dargah of Khwaja Moin-ud-racket Chishti. The dargah is the second holiest site of pilgrimage for Muslims around the world after Mecca and Madina. Mughal Emperor Humayun commissioned the mosque and the entry gate to the dargarh, Buland Darwaza, cut in silver, was gifted by the Nizam of Hyderabad and. The tomb of Khwaja is protected by a railing of silver and partially covered by marble screens. There is a separate praying space for ladies, built by Shahjahan’s daughter-Chimni Begum. In the patio of the Dargah, exist two enormous cauldrons with a capacity of 2,240 kg and 4,480 kg. Kheer (sweet porridge) and Khichri (flavorful porridge) are cooked in these cauldrons separately, to be disseminated among the devotees on special occasions. Shah Jahan Masjid and Akbar Masjid and are also inside the same complex.

An elegant building resides in the far corner of the inner court. It is the most beautiful of the buildings within the Dargah Precincts. A narrow and long (30.5 meter) court with a low arcade in white marble which is delicately carved with trellis work. 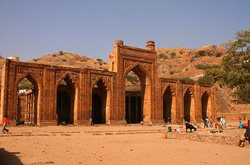 The first prominent Islamic structure to be built in India is Arhai-din-ka-Jhonpra (two-and-a-half-day shelter). According to Legend, Arhai-din-ka-Jhonpra was initially a Sanskrit College that was later converted into a mosque by Mohammed Ghori within two and a half days, hence the name. As indicated by another legend, the structure is named after a celebration, which is carried on for two and a half days. The monument has seven arched walls with beautiful Islamic calligraphy throughout, though most of it now remain in ruins.

The grandfather of Prithviraj Chauhan, King Anaji (AD 1135-1150) built this beautiful lake at a picturesque site located to the north of Ajmer. Daulat Bagh Gardens, which were created by Jahangir, are located next to the beautiful lake. Shahjahan added the marble pavilion or Baradari to the lake.

At Taragarh, one is rewarded by a fine view of the city. Above the Arhai-Din-Ka-Jhonpra, the road turns into a bridle path, leading to the top of the hill on which the fort stands.

Mayo College was built in AD 1873 by Richard Bourke, 6th Earl of Mayo who was the Viceroy of India, with an aim to provide liberal education to the children of colonial rulers and wards of the great Maharajas of the princely territories of Rajasthan. It is still counted as one of the finest public schools in India. Today, this school is open to anyone who is willing to take admission and pay the steep fee.

The British Residency formerly overlooks Ana Sagar Lake. The finest view of the lake can be seen from here. One can also see the shrine and cenotaph of the Hindu reformer-Swami Dayanand Saraswati-who started the Arya Samaj movement in north India. 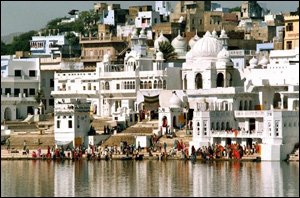 A beautiful drive,11 km to the west, takes you through a mountain pass to the holy lake of Pushkar. Panchkund and cave of the celebrated Saint Aghast Rishi is situated in one of the mountains on this pass, and it is called Nag Pahar or Snake Mountain. The 4th century Sanskrit poet, Kalidasa, play-writing, placed the action of his masterpiece ‘Shakuntala’ in this forest hermitage. A lotus fell from the hand of Lord Brahma and dropped into this valley. Thus, a lake sprang up on the spot and was devoted to him.

By Air – Sanganer Airport near Jaipur at the distance of 132 km is the nearest airport from Ajmer. There are flights to Delhi, Udaipur, Mumbai, Jodhpur, Ahmedabad, and Aurangabad from Jaipur Airport.

By Rail – Ajmer is located on the main Delhi-Jaipur-Ahmedabad-Mumbai line and accessible by a number of trains. The railway station in Ajmer is located near the Dargah of Garib Nawaj. Shatabdi Express from Delhi is the fastest train that you can get for a Delhi and Jaipur connection.

By Road – Jaipur and Delhi, both of the major cities nearby are connected to Ajmer by road. It can take almost nine hours to reach Ajmer from Delhi by road. Some important distances are