Rajasthan and festivities go hand in hand. It is a cultural hub of celebrations and is known for its innumerable fairs and festivals, going on throughout the year. The dynamic vibe of this glorious state offers its visitors days enriched with enthusiasm, fun, frolic and excitement. Festivals in Rajasthan are usually celebrated with folk dances supplemented by regional music played by instruments made locally. It is truly a delight to witness the locals dressed in their elegant ethnic attires, participating in the musical events whole-heartedly. On such occasions, one can see people from all the generations, young and old, dancing to the lively beats of the Rajasthani folk music.

Festivals provide the travelers with an opportunity to fully immerse themselves in the state’s culture while interacting with the local folks and understanding every aspect of their cultural life. This undoubtedly proves to be a thrilling and captivating experience, leaving you with a constant urge to revisit this vibrant and colourful state of Rajasthan. 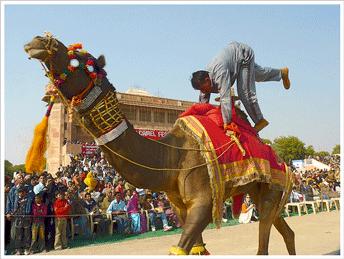 Every year, the Department of Tourism, Art and Culture organises an exciting, vivid and colourful event- the Camel Festival in the beautiful city of Bikaner. The best time to explore the ships of the desert is January and Bikaner is just the right place to bring out the desert spree in you.

The Nagaur Festival is organised annually at the quaint Rajput town of Nagaur during the months of January and February. The festival is basically a cattle fair with a trade of approximately 75000 camels, bullocks and horses takes place every year. The extensive volume of cattle trading is something that never fails to amuse the first-time visitors. 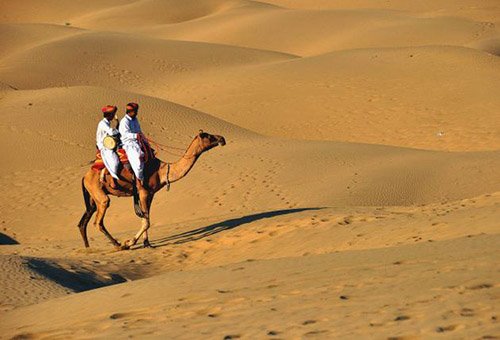 The highly popular and widely acclaimed Jaisalmer Desert Festival takes place annually in the month of February, in the beautiful desert city with the Golden Fortress of Jaisalmer, Rajasthan. It is a 3-day cultural festival that portrays a rich and colourful image of Rajasthan and its folk culture. Various folk artists from around the Rajasthan get together during the Desert Festival to celebrate the triumphs and tragedies of their historically rich land. Numerous dancing and singing acts are performed, thereby providing tourists with a deeper insight into their dynamic and vibrant culture. The traditional acrobatics performed by the local nomads and gymnasts called Kalabaz or Nat’s is something that shouldn’t be missed at any cost. Besides this, other major attractions at the Desert Festival are snake charmers, beautiful bazaars, entertaining puppet shows etc. The melodious folk music and ballads performed by the Bhopa’s, Langhas and Manganiars under the dark winter desert sky, gazing at the stars shining from within.

A popular tribal fair, Baneshwar Festival is organised every year in February at Dungarpur district, Rajasthan. Baneshwar is a small delta formed by the River Soma, 50 km away from Dungarpur. This is where the festival is held at, every year and has derived its name from. The fair is primarily an extremely significant event of the tribals. Derived from the Shiva Linga worshipped in the Mahadev Temple at Dungarpur, the word ‘Baneshwar’ means "the master of delta". The festival is basically a religious event where the tribal population of Bhils from neighbouring states of Madhya Pradesh and Gujarat, come together and perform some simple and traditional rituals while offering their prayers to Lord Shiva. 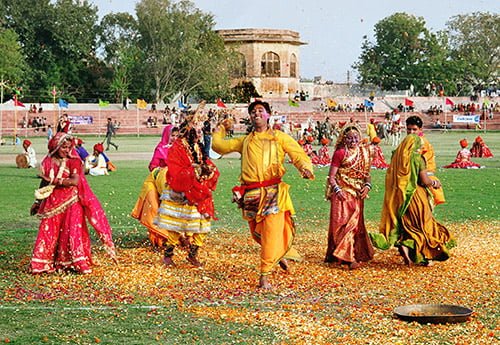 The well-known Braj Festival is organised every year in honour of Lord Krishna. It is held in the month of March, a few days before Holi (the festival of colours). The festival is celebrated with immense zeal and enthusiasm. A major attraction of this festival is witnessing the villagers in their bright, multihued attire as they perform the Raslila dance (dance depicting the eternal love story of Radha and Krishna). 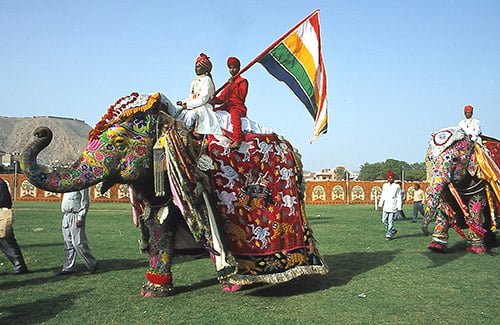 The Elephant Festival is a cultural and social event held every year in Jaipur (also known as the pink city), the capital city of Rajasthan. The Elephant Festival is organised on the full moon day of Phalgun Purnima (Feb/Mar) as per the Indian Calender. Another festival known as Holika Dahan is also celebrated on the same day followed by Holi, the festival of colours and happiness on the next day. 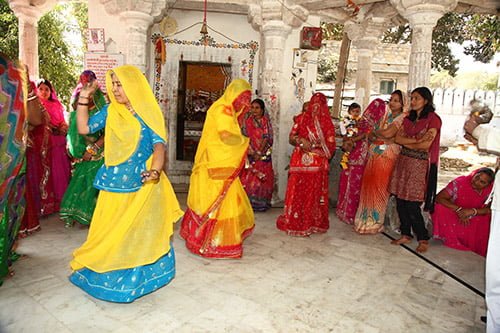 Kaila Devi Festival is organised every year, in an attempt to show devotion to Kaila Devi (Mahalakshmi or The Goddess of Wealth). It takes place in the village of Kaila (24 km to the south-west of Karauli) in the district of Karauli, during the month of Chaitra (Mar-Apr) as per the Indian calendar, and lasts a fortnight. The major attraction in Kaila is the Temple of Kaila Devi, which is located on the banks of the Kalisil river, a tributary of the Banas river in the hills of Trikut, 2Km to the North-West of Kaila village.

Other small attractions at the Festival include a temple of Hanumanji facing the Kaila Devi Mandir, locally known as ‘Languriya’ and another small temple present in the courtyard, created for worshipping Bhairon.

Gangaur Festival is a religious and cultural event of great significance, and is extremely popular all over Rajasthan. The name of the festival is derived from ‘Gan’- a synonym to Lord Shiva and similarly ‘Gauri’ or ‘Gaur’ refers to the Goddess Parvati, the angelic companion of Lord Shiva. This festival symbolises and celebrates the union of Shiva and Parvati and their timeless love. It is celebrated somewhere in between the months of March & April. This time of the year indicates the end of winter and the beginning of spring.

In Rajasthan, the Mewar festival is a welcome treat for the much-awaited spring season. This festival also coincides with the Gangaur Festival of Udaipur, but is very different and has a unique charm of its own. The women of the village gather to dress the sculptures of Gangaur and Isar and then carry them in a ceremonial procession through different parts of the city. The event is ended at the Gangaur ghat, lake Pichhola. Here the dressed sculptures and other things are placed in special boats while the locals continue singing and dancing during the festivity.

The Shri Mahaveerji Fair takes place in Chandangaon. The event is organised to honour the memory of Shri Mahaveer Swami, the 24th Tirthankara of the Jains. It takes place in the month of Chaitra (Mar-Apr) from Shukla Ekadasi(11th day of the lunar moon) to Baisakh Krishna Dwitiya ( 2nd day of the next month). The venue of the fair is the Mahavirji temple which is located in an enclosure known as ‘Katala’ and houses the sculpture of Mahavir swami rumoured to have been dug out by a leather worker from Devta-ka-Tila.

Every year on the day of Buddha Purnima, the Summer Festival is organised amidst the beautiful surroundings of Mount Abu. The Summer is symbolic of the jovial and cheerful nature of the people of the hill station, who warmly welcome the tourists with their arms wide open. The warm acceptance by the locals, their vibrant culture, steady lifestyle and the exotic locations make this eloquent festival worth attending.

The Teej Festival is celebrated as one of the most important festivals in Rajasthan. It is held in the ‘pink city’ of Jaipur and is celebrated with immense fun and frolic. The festival is marked by swings, traditional songs and folk dance performances in Rajasthan. Unique acts of traditional folk dances are performed by the local women dressed in an attire of bright green colour as they sing melodious Teej songs and sway on swings decorated with flowers. Women and young girls are known to dress in their best clothes and finest jewellery on this day. They get together at a nearby temple or common place to offer their prayers to the Goddess Parvati, for the good health of their husbands.

The celebration of monsoons (July-August) is known as the Teej Festival, which is held in each region of Rajasthan with a unique touch of its own.

Kajli Teej of Bundi varies from the one celebrated in other parts of Rajasthan, in many ways. While the third day of the month of Shravana is marked as ‘Teej’ in most of the regions, in Bundi, Teej is celebrated on the third day of the month of Bhadra. The festival begins with carrying goddess Teej in an adorned palanquin from the wonderful Naval Sagar. Passing through the main bazaars, the festival terminates at the Azad Park. The major attractions of this festival are beautifully decorated elephants, camels, regional bands, performing artists and the locals dressed in their vibrant & colourful attires.

Dussehra is marked as one of the biggest festive events, celebrated across the nation. The festival indicates the beginning of the much-awaited winter season after the scorching heat of summers and is celebrated with immense fervour and enthusiasm. Mythologically, Dussehra signifies the victory of Ram over the demon Ravana as he rescues his wife Sita from Ravana’s bondage. The festival is symbolic of the truth’s triumph over evil. Massive effigies of ten-headed Ravana and his brothers are set ablaze amidst the bursting of crackers, in the northern part of India. The festivity is accompanied by various fairs held on this occasion, offering a wide variety of items to eat, buy and enjoy.

The Matasya Festival is held in Alwar, annually. It is considered to be an extremely significant one, in the region. Celebrated with immense joy and zest, the festival depicts the affluence of cultural values and beliefs of the state.

The Marwar Festival is a 2-day festival, organised on an annual basis to honour the mighty heroes of Rajasthan. The festival is held in the city of Jodhpur, during the month of Ashwin (September-October) on the full moon days of Sharad Poornima. Originally, the festival was known as the Maand Festival, featuring the folk music depicting the romantic lifestyle of the brave rulers of Rajasthan. This event is entirely devoted to the regional music and dance performances of Marwar and offers an amusing sight to its visitors as the folk dancers carry pots on their heads and singers who assemble and entertain for several hours at a stretch. These folk performances intend to bring back the days of battles, the tales of heroism of their valiant heroes; who continue to live through their songs.

The Pushkar Fair, or as it’s popularly known- Pushkar ka Mela, is an annual five-day camel and livestock fair, that takes place in the town of Pushkar, Rajasthan, India. It happens to be one of the world’s largest camel fairs, that has now become a major tourist attraction besides the buying and selling of livestock. The fair is marked by some fun-filled competitions such as the "matka phod", "longest moustache", and "bridal competition" which attracts thousands of tourists. In recent years, the fair has also included an exciting exhibition cricket match between the local Pushkar club and a team of random foreign tourists.

The renowned Chandrabhaga fair is organised annually in the month of Kartik (October-November), as per the Indian calendar. The festival takes place at Jhalrapatan, located at a distance of 6 km from Jhalawar. The river Chandrabhaga flows through this town and is considered holy by people residing in this part of Rajasthan. Thousands of devotees visit the fair to take a holy dip in the Chandrabhaga river on the full moon night of ‘Kartik Purnima’. A lively cattle fair that interblends religion with trade, takes place at this festival. Traders from varied regions of Madhya Pradesh and Maharashtra unite here, leading to brisk trading. This festival provides the travellers an opportunity to interact with the locals and get a deeper insight into their culture and traditions.

Every year, Mount Abu celebrates its Winter Festival in the last week of December. It is a three-day cultural gig organised by the Rajasthan Tourism and Municipal Board of Mount Abu. This festive event intends to celebrate the warmth and enthusiasm of the people of this captivating hill station. The locals of this region are widely known to welcome the tourists from the bottom of their hearts.