Location – Sawai Madhopur (Rajasthan)
Coverage Areas – 1334 sq. km (Total area)
Best time to Visit – The National Park is open from October to Mid-June. The best time for tiger sighting is summer season from April to Mid-June. Park is closed from July to September and sometimes even closure may extend to few days in October depending on rains in monsoon season. 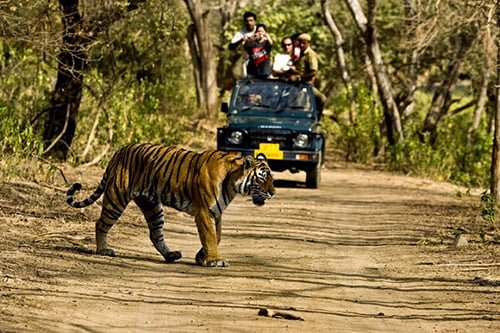 Ranthambore National Park is one of most popular wildlife sanctuaries not only in Rajasthan but all over India. The park was once a game reserve or hunting ground of Royal family of Jaipur but later declared as Sawai Madhopur Game Sanctuary by Govt. of India in the year 1955. Later in 1973, the Sanctuary was made Project Tiger Reserve. Finally, in 1980, it got the status of National Park and twelve years later, the area of Ranthambore National Park was expanded by including Sawai Man Singh and Keladevi Sanctuaries nearby. That is how it covered present area of 1334 sq. km.

Besides abundant nature in form of flora and fauna, the landscape of Park has become more fascinating because of 10th century Fort besides stone temples, ruins and monuments which are testimonial for the battles and romance of bygone era.

The diverse landscape of Ranthambore National Park also makes it ideal to be home to variety of bird species. More than 275 species of birds are found here and most of these birds are migratory. The National Bird of India, Peacocks are found in big number in the park besides Great Indian Owl, Partridge, Kingfisher, Spoonbill, Parakeet, etc. making it a great Park for bird watchers as well.

FLORA
The dry type of vegetation with a large variety of over 300 species is there. While the main attractions are really old Banyan trees, Axlewood (Dhok Trees) are also found in these forests in abundance. This is natural because the region is drought prone and Dhok trees can survive in such climate without water for a long period. The Banyan trees here are said to be among oldest to be found in India. Other kind of trees found in this forest terrain are Tamarind, Babul, Dates, Neem, Jambolan (Jamun), Burflower-tree and many more.

There were only 5 zones earlier but as The National Park became more and more popular, it was expanded to 10 zones in order to accommodate more visitors without causing much disturbance to wildlife.

The visitors can go for morning or afternoon safaris or both safaris every day by 6-seater Gypsy or 20-seater Canter Open Van. Both Gypsys and Canters are accompanied by trained naturalist guide. They have to follow a certain route for the safari inside the park. Usually people have preference for zones 1-5 because there is a good chance of spotting a tiger which is true to a great extent and also safaris for these zones are booked before other zones. But as per local guides, there have been good sighting even in other zones 6-10. Zone 3 and 5 have lakes on the route and there make these routes more attractive giving a good chance of tiger sightings. Zone 9 & 10 are also said to be territory of biggest Tiger of the Park. Although everyone may have own opinion, but we rate Zone 1-3 as best zones, 4 & 5 as good zones and 6-10 as average zones for tiger sighting. You can select any zone at the time of reservation if it is available but once you select it, then the safari will be organized in that very zone.

Please keep in mind that sighting tigers is just a chance, and no one can guarantee you this. However, in previous years, the chances of sighting tiger have been much better and a high percentage of visitors who have gone for jungle safari have been able to sight a tiger.

According to existing arrangement in Ranthambore jungle Safari Booking policy, only 20 jeeps of 6 seaters and 20 Canter of 20 seaters can enter in each shift. Please also note that safari driver or naturalist guide are entirely decided by the forest officials on the random basis by the automated computerized system to ensure equal distribution of vehicles in every zone.

Zone 1: This zone is more of a Core zone and home to T-39 and T-57 Tigers as well as Tigress Sultana.

Zone 2: This zone is very popular because visitors have been able to enjoy good sighting here. Sites like Jogi Mahal, Phuta Kota and other ruins make it more interesting. This zone is territory of Tigers – T19, T22, T72, T57, T28, T60, T39 as well as Leopards have also been seen here.

Zone 3: The zone is one of most interesting zones as it has also got water body like Padam Talab which makes it very popular with visitors to the Park as it has better tight sighting chances due to the lake. Tigress Arrow Head (T84) and 2 cubs roam around freely in this zone.

Zone 6: This zone shares certain portion of boundaries with zone 1 and has more open grasslands with high mountains as its backdrop. This zone is home to Tigers – T-34, T-39, T-57, T 58 and T-8 with 3 Cubs. There are few villages which are quite near this zone.

Zone 9: This zone little far from the main Tiger on the banks of Chakal river. This zone is territory of one Male and One female with Tiger and Tigress with 2 cubs. Visitors have also spotted Sloth Bear and Caracals in this zone.

The most popular way of exploring the National Park to have a date with Tiger is Jeep Safari. There are 6-seater 4×4 Gypsy for jungle safari in Ranthambore Sanctuary. This is the best mode for wildlife enthusiast and for photography as it carries only a limited number of persons therefore giving visitors more flexibility and better chances. It is very important to book jeep safari as early as possible to avoid disappointment as entry is restricted to only a small number of Gypsy in order to not disturb the animals and therefore these are booked months in advance.

Another option other than Jeep Safari is jungle safari by Canter. It is a 20-seater open van which is a good option. It is cheaper than Jeep safari and the chances of availability of this safari is more than Jeep Safari. It is similar in nature except the fact that jeep being smaller in size and carrying lesser number of persons is able to go through narrow and winding trails.

Note : The above timings are as per information available and you are advised to check if there is any change in the timing to avoid any inconvenience.

By Air: Jaipur used to be the nearest airport for Ranthambore National Park, only 170 km away from Jaipur airport. Now, Kota airport has also become operational with regular flights from Delhi. Kota airport is only 145 km from Ranthambore.