Get aboard The Palace On Wheels and ready yourself for a charming imperial excursion through the past and splendour of the great Maharajas of Rajasthan.

Despite the fact that circumstances are different and the world has changed, the Palace On Wheels reminds you of imperial days, the kind, just the Maharajas of yesteryears could have sustained and delighted in.

The stunning and exclusive Palace on Wheels has lavish accommodation from one corner to another with well-stocked bar and two dining coaches. 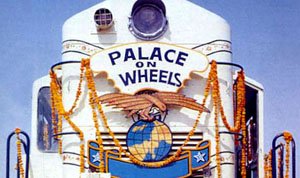 The 14 coaches are named after former Rajput states in line with the style and decor of the regal era. Each cabin has a mini pantry and a lounge that guarantees the availability of various kinds of hot and cold beverage, snacks and a place to relax and get together.
Rooms

14 completely ventilated luxurious saloons, each a mix of 4 twin-bedded chambers with channel music, attached toilets, running hot and cold water, shower, intercom, wall to wall carpeting and other basic amenities. The furniture with its decorated themes has been exclusively made for the Palace on Wheels.
Restaurants 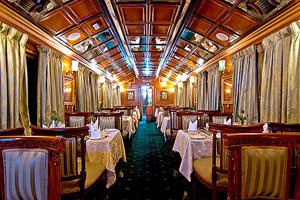 The train has two incredible restaurants “The Maharaja” and “The Maharani” with a Rajasthani ambiance serving palate tickling Continental, Chinese, India and Rajasthani cuisines.
Bar 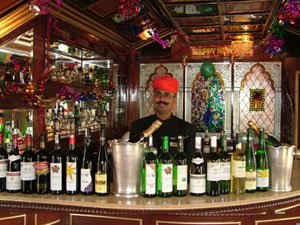 The train has well stocked bar offering the choicest of spirits of Indian and worldwide brands. Every coach also offers a great collection of books for reading.

Each saloon lounge has been furnished with TV and a DVD player. A satellite telephone is available to connect you to any place from the train.

The cost does not include :