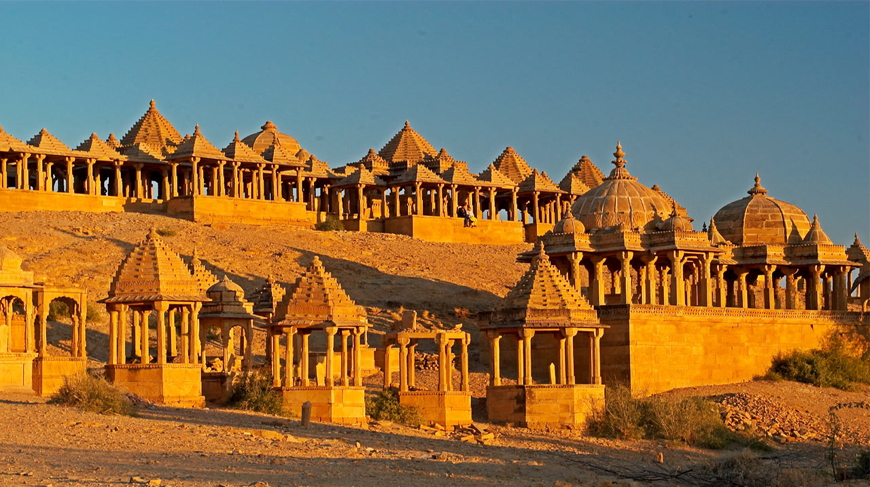 Morning departure for Jaisalmer which is an architectural dream, situated amidst the lonely yellow silence of the desert. Popularly known as the Golden city, Jaisalmer was founded by Jaisal Singh, a Rajput king. Jaisalmer is known for its elaborately carved havelis and 12th century fort. The golden city is scattered over the desert land of Rajasthan and is a combination of ancient and the medieval era architecture. Overnight stay.

After breakfast, we explore golden city and start with our visit to Jaisalmer Fort which is one of the oldest forts in Rajasthan. The fort is made of yellow sandstone and it is a massive structure in the desert town. The architecture of fort is an amalgamation of Rajput and Islamic style. This is undoubtedly a breath–taking sight to watch as it appears to rise from the arid sands of Thar. The fort is actually still alive with people still abiding within its walls.The fort complex consists of a palace and numerous beautiful Jain temples. Nearby is Patwon ki Haveli, one of the largest havelis in Rajasthan. It is a group of five small havelis with beautiful intricate carvings on the windows. Even today, you can sense the old world charm and royalty of these havelis. We will also visit Nathmal ki Haveli which gives visitors a glimpse of Marwari community lifestyle. The carvings on the walls are a visual treat to the eyes.

Later in the afternoon, get ready for an excursion to the sand dunes, few kilometer away from Jaisalmer City. Enjoy the sun set across the horizons of never ending sand dunes on the back of a camel in the desert. It is now time to return to the hotel for overnight stay.

We leave for Jodhpur in the morning. Jodhpur is also known as gateway to Thar desert and the blue city as most of the houses in the old Jodhpur are painted in blue color. This crowded desert city flutters with beauty, warmth and romance. A visit to Jodhpur is a romantic journey into the past with forts, palaces, temples, culture, tradition, spices, fabric, color, and flourishing handicrafts.

Arrive at Jodhpur and check–in at hotel. Afternoon we go for city tour of Jodhpur. The city is also known as the blue city as most of the houses are painted in blue. A visit to the city is a an experience which will last a life time it takes you into the past with its fort, palaces, monuments, temples, tradition and handicrafts. We first visit Mehrangarh Fort which stands a hundred feet above a cliff and dominates skyline of Jodhpur. It is made of red sand stone and looks invincible and impressive. It is so huge that Rudyard Kipling called it “the work of giants”. It is definitely one of the best preserved forts in Rajasthan. The Palaces within the fort are known for intricate carvings and courtyards. There is a good collection of musical instruments, royal costumes, royal palanquins, and cannons.

We also visit Jaswant Thadaw hich is beautifully set against the hilly background and glistening lake. The tour continues to visit beautiful Mandore gardens, located 9 Km away from the city. Return to hotel for overnight stay.

We shall next visit Jagdish temple which is adjacent to City and a steep staircase takes us there. The entrance of the temple is greeted by two elephants. The stone art work and intricate carving on the walls is remarkable. We shall now drive to Saheliyon Ki Bari Gardens which is the most beautiful garden in the city. It was built for princess and her forty eight maids who come to Udaipur along with her as part of her dowry. The wonderful lay out of the garden is a treat to your eyes. In the afternoon transfer to airport to catch flight for onwards destination.